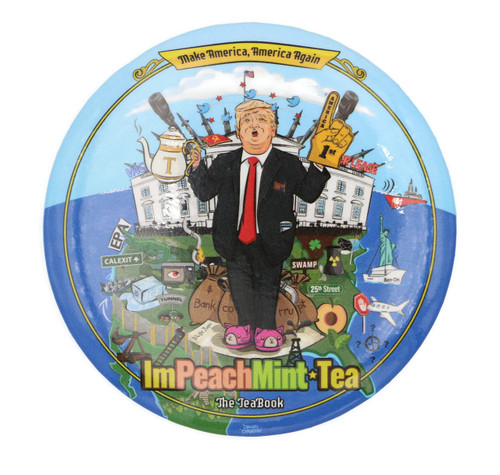 Politics and buttons are as old a partnership as tea and water.

So, 4 years ago we made this amazing 3" button, Which predicted all the things he would do

Made in The USA.

Here are the leaked secrets in the ImPeachMint Art.

2.) Art: CALEXIT Sign
Politics: There was a movement to have California leave the Union in 2018, and it's California highway exit sign.

3.) Art: Melting Ice Cube with I.C.E logo.
Politics: The Ice Cube stands for ICE (U.S. Immigration and Customs Enforcement) and their symbol is on the cube.  It also represents Global warming both especially affecting the Southwest.

4.) Art: Microwave with an eye:
Politics: The Presidents spokesperson Kellyanne Conway, in defending trumps false claims that Obama wiretapped him said "...you can surveil someone through their phones, through their—certainly through their television sets, any number of different ways, and microwaves that turn into cameras, etc." So we know that that is just a fact of modern life.”

5.) Art: The Wall
Politics: Trumps ridiculous idea to the build a wall between Mexico and the US is pointless, and there are 5 reasons in the art 1.) A ladder to climb over 2.) A catapult to throw things over 3.) A tunnel to go under 4.) A boat to go around 5.) Airplanes are the largest single most used method to enter the US and become an illegal immigrant. Walls don't work against planes, ask the french.

6.)Art: Two White House Signs
Politics: "The Vacancy Sign" is that once the president is impeached, there will be a temporary vacancy. The "For Lease Sign" is how foreign and domestic entities can temporarily "lease' the white house by staying at Trump properties, joining his clubs, or granting him trademarks.

7.)Art: "The Swamp Sign"
Politics: Trump promised in his campaign that he would drain the swamp of special interests and "Hillary supporting wall street" from the white house. He did the opposite, and made the swampiest cabinet in US history, spreading all over America.

8.) Art: Mailbox with Black Letters.
Politics: This represents the blackmail used to control the president such as the Russian dossier and his taxes. Blackmail and threatening government officials maybe used by the president to get support for his agenda.

9.) Art: Oil barrels, Pipelines and Wells
Politics/environment: Besides the fact that the head of the largest US oil company was appointed as Secretary of State, Trump and other GOP cabinet members received tens of millions in campaign contributions from the fossil fuel industry.


Top Secret:  Not obvious, requires more in depth explanation:
1.) Art: "The Tunnel" contains an extraterrestrial.
Politics: Often referred to as an "aliens", the etymology of the word is from "belonging (somewhere) else". We feel Trump belongs somewhere else, making him an Alien.

2.) Art: Peach and Mint in the Southeast.
Geography: These are the flavors of the tea, but it is right where Georgia is located. Georgia is best known as 'The Peach State." Its even on their state quarter.

3.) Art: "25th Street Sign"
Constitiutional: A street is a path or way, and the 25th is the 25th amendment of the constitution.  This allows the vice president to assume presidency if the president is "mentally" or "physically" incapacitated without the need for impeachment.

4.) Art: Nuclear Reactor.
Politics: Trump desires to increase our nuclear weapon stockpile to create a new Cold War with Russia, despite the fact that we have over 4,500 nuclear weapons. It also represents the fear of nuclear weapons in the hands of North Korea and Iran.

5.) Art: Four leaf clover
Politics/Marketing: For St. Patrick's Day Trump made a green "Make America Great Again" hat. Except he put a four leaf clover instead of the 3 leaf clover which represents The Trinity.  He also called it St. Patty's day (like a hamburger), instead of St. Paddy's Day. he offended alot of Irish people that day.

1.) Artist: The Artist Daniel Orozco, is a Mexican immigrant from Mexico City.

2.) Science/Politics: All tea, wether Green, Black, White, Oolong, or Matcha comes from the same plant Camellia sinensis.  This Tea is from the Rooibos plant, it's not a real tea. Just like president trump is not a real president.

The TeaBook - The Best Tea Storage Organizer Ever!