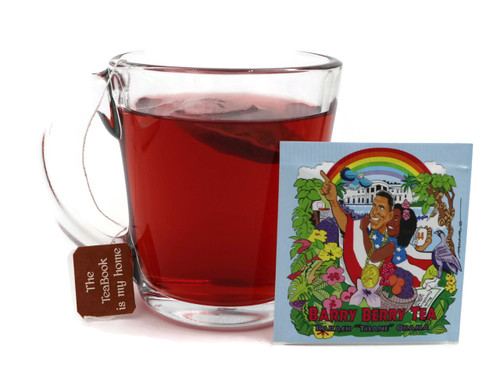 The perfect gift for someone that loves tea, The Obama's, The USA, or misses him as president or collects artwork.
Bring to friends or serve it and watch the laughs and conversation heat up!

Quote on back of bag: "The Strongest Weapon against hateful speech is not repression; it is TEA" - Barack "Tisane" Obama

About The Artist
The Artist: Robb Armstrong

References in the art, try to find them before scrolling down.

Obama:1.) The Nobel peace prize he won.2.) His birth certificate, because of the birther movement “The proof is in the tea”.3.) His mug says 44, since he was the 44th president.4.) The tea tag says 2, because he served two terms.5.) The bird on the right is wearing White Sox, Obama's favorite team.6.) “Barry” in the flavor, was the name Obama used until college.7.) “Tisane” in the name is the french/latin word for herbal tea.8.) The fruit basket hints to Michelle’s nutrition program9.) The scene is the “Garden of Eden.” We wanted to convey Obama’s deep christian faith, and the garden was the perfect analog. It parallels his presidential portrait and his environmental legacy. Additionally, he was the first black President and Michelle the first black First Lady, Adam and Eve were the first man and woman.9.) The snake represents sin and temptation in the garden. In the tail you will find the letters GOP.10.) The snake is smoking, as this was one of Obama’s vices until Michelle helped him quit.11.) There is a basketball hoop in the background, since Obama loves basketball and converted the White House tennis court into a basketball court.12.) The bird in the left corner is the official bird of Kenya (Google it), referencing Obama’s Kenyan ancestry.13.) The rainbow represents Obama’s legacy of fighting for LGBTQ+ equality.14.) Like Obama, the artist Robb Armstrong is one of the first black syndicated cartoonists with his series “Jump Start.”15.) Lastly, two of the ingredients are imported from Africa, but are now sitting in your cup of tea...